As leaders we are often asked about where a particular badge should go on the uniform or find ourselves asking Scouts to move them as they have sewn them on in the wrong place! Also we are forever finding random bits of Scouts uniform lying around (often in the mud!) so we would be really grateful if all items could be clearly named to help us to return them to you.

If you are just joining, each section has their own uniform top that members will be expected to wear to be invested and from then on. These are usually required a few weeks after they join the section and can be bought from the Scout Shop in Cambridge or on-line at the Scout Shop. Uniform for the Beavers, Cubs and Scouts can also now be bought from John Lewis either on-line or in store. For Beavers the Uniform is a Turquoise Sweatshirt, Cubs a Green Sweatshirt, Scouts have a Green Shirt and Explorers a Olive/Brown Shirt.

When they are invested a scout will be presented with a number of badges to sew on to their uniform along with a group necker and woggle. These symbolise what scouting is about and are given to every single member of the Group right through from Beavers Scouts to Adult Leaders.

The most confusing badges for us are the District and County badges. These are sewn onto the right arm with the Blue District badge showing the Cambridge Backs at the back and the Yellow edged County badge at the front. The 11th/9th Name tape is sewn above the two badges.

no images were found

The Group Badge brings together aspects of both the 9th and 11th Scout Groups. The 9th Cambridge was founded as the Queen’s College Choir troop and, with generous permission of the College, we place their badge in the centre of ours. The Boar’s Head was the badge of King Richard III of England, whose wife gave Queens’ College money and land It has been used by the College since 1544 and is on the original flag of the 9th Cambridge

In more modern times, the 11th Cambridge was associated for many years with Alan McKenzie who was a Scout Leader and Chairman of the group, giving his time and wisdom to help others. Alan was involved with Scouting through the Group from 1932 until his death in 2009: we remember his dedication by having the McKenzie tartan as the background to our badge.

Please wear this badge on your group neckerchief with pride. Let it remind you of the generosity shown by others and encourage you to show generosity in turn. 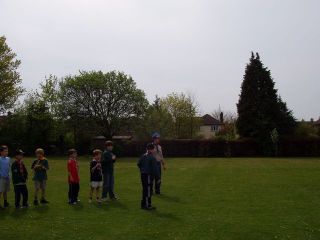 This symbolises that we are part of a world wide movement of scouts and is worn by all scouts in every country accross the globe. It is sewn centrally onto the chest pocket.

no images were found

Badges - Click on the links to the right to find out where to sew on badges for each section.